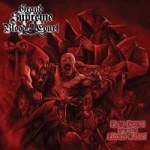 The phenomenon of so-called "super-groups" is not so uncommon in classic Rock music, but as far as Death Metal is concerned, it still is some kind of sensation. Here we have a new case of a band that can be concerned a super-group. GRAND SUPREME BLOOD COURT is more or less a reunion of the ASPHYX line-up that recorded those albums, who are considered their greatest classics: "The Rack" and "Last One On Earth". Martin van Drunen, Bob Bagchus and Eric Daniels, back after a break, were joined by HAIL OF BULLETS bass player Theo van Eekelen and current ASPHYX bass player Alwin Zuur, who took over the guitar here. So it is not really a surprise that GRAND SUPREME BLOOD COURT delivers Doom Death Metal de luxe on their debut-album "Bow Down Before The Blood Court". And, no joke, this album really is deluxe, an album which definitely fulfills the great expectations! From the first seconds after the chiming bells that promise doom, we get finest Eric-Daniels riffing, which is so typical for him and Bob Bagchus’ best drumming. Garnished with the always ruling vocals by Martin van Drunen, they recorded an album every "The Rack"-aficionado should love. If you need melodies and guitar solos, you will not find what you want here, since the power of the riff crunches all else here. Especially worth mentioning is the unyielding brutality and the balance between slow, crunching parts and faster beats or even up-tempo songs like ‘Behead The Defence’. And as if all this wouldn’t be enough, GRAND SUPREME BLOOD COURT finish the album with a slow riff massacre in the vein (and with the class) of ‘The Rack’. The 10-minute-epic ‘…And Thus The Billions Shall Burn’ maims everything in its reach, extremely brutal and the definite highlight not just of the album, but of the whole fucking year! It’s now time to "Bow Down Before The Blood Court" and listen to this album. Go to: www.facebook.com/grandsupremebloodcourt (you can listen to ‘Circus Of Mass Torment’ here), or check: www.centurymedia.com.