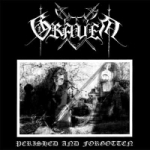 These guys already caught my attention about two years ago when I noticed a small ad for their “Of Misanthropic Spirit” demo CD somewhere. Without hearing a single note, I somehow knew that this band was worth checking out because their whole visual presentation and attitude proved a lot of taste already… Unfortunately I lost sight with them again (too many releases – too little time…) and therefore missed out on that particular demo (stupid me!). In 2001 they participated in a split release with BARAD DÜR, which featured three wellknown GRAVEN tunes (I suppose they were simply taken from the demo) and now they finally return with their debut full length “Perished And Forgotten”. Luckily the material on the album didn’t let me down at all – it actually proved my suspicion right. GRAVEN is indeed a fuckin’ great band! Raw, unpolished and very grim sounding Black Metal, in the tradition of the originators of this style is what you get throughout the album’s playing time of approx. fourty minutes. This ain’t no wimp shit and no MARDUK / DARK FUNERAL type highspeed Black Metal either. This is actually a lot more inspired by the first four BATHORY albums, just more evil and blasphemous sounding! They certainly deliver the right atmosphere within their songwriting to get named along the lines of DARKTHRONE, TAAKE, ISVIND, CARPATHIAN FOREST, SECRETS OF THE MOON, ARMAGEDDA, old EMPEROR, old IMMORTAL and so on. “This is GRAVEN’s final recording in that kind of too clear and unraw sound… our future releases will be again more grim and hateful…” is printed inside the booklet, which could mean that despite the quality of “Perished And Forgotten” (which is by no means too clear and unraw in my opinion), they will probably evolve even further into a pure, uncompromising direction. Highly interesting band! In the meantime make sure check out “Perished And Forgotten”!