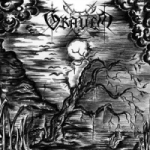 About three years after the release of “Perished And Forgotten” GRAVEN’s former member Vronth has resurrected the already buried and rotten corpse and delivers a new album, with a totally different line-up though. As you all probably know, GRAVEN used to split up back then, which resulted in two highly recommended full length albums by Vargsang’s self-titled project afterwards (“Call Of The Nightwolves” and “Throne Of The Forgotten”). I never really found out whether or not Vronth also used to be active in one way or another ever since, but that doesn’t really matter anymore anyway as GRAVEN’s return totally overshadows every attempt now. Besides Vronth, who still plays the drums for GRAVEN, the band consists of a (to me rather unknown) guitarist named Mardar as well as NAGELFAR / GRAUPEL vocalist Zingultus. And believe me: they both do a really great job on “The Shadows Eternal Call”, that’s for sure! Instead of coming up with annoying musical experiments, GRAVEN anno 2005 focus on what they always did best, which is simple and very grim old school Black Metal in the early BATHORY meets DARKTHRONE vein. If someone tells you that a band of that kind has to come up with a rehearsal type sound in order to fullfill the expectations of the narrowminded Black Metal community and related genre “rules”, GRAVEN easily prove this statement wrong! The production of the album is fantastic: it’s totally clear, yet delivers the raw grimness that turned early DARKTHRONE releases into alltime classics! The guitar is in the usual tuning, the riffing icecold & razorsharp, the drumming straight forward and luckily non digital sounding while the icing on the already rather tasty cake is Zingultus’ excellent vocals! He’s definitely one of the best of its kind in that department, perfectly knowing what kind of vocal lines a Black Metal song demands! As a result the whole atmosphere of “The Shadows Eternal Call” is far more Black Metal than anything released by MARDUK, DARK FUNERAL and all the other highspeed Blacksters together! Now this is what I call a great dark and sinister feeling and a totally perfect songwriting. Fuck innovation in Black Metal as long as it sounds as impressive as GRAVEN’s return to an already rather washed out scene! www.undercover-records.de