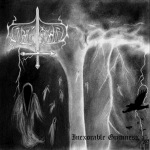 An American band formed in 2004, playing a melodic form of Black Metal. It reminds me of mid period GEHENNA, some EMPEROR and some bits of early ENSLAVED too. And this comes with a very good production, and also a very good performance. The sound is also quite good, it is not too polished, yet it has a raw edge not sounding too noisy. The overall result turns out to be atmospheric. Maybe the drums tend to get lost a bit in the fast parts, but that would probably be my only complain here. They have a very strong guitar sound, something rare in this kind of more atmospheric Black Metal. And also the riffs, yes, there are many here, like the main riff in ‘Thy Gates Ablaze’. Also the vocals are quite good, they show in the same style a variation here and make things sound more interesting. Also I can hear a good old school Thrash Metal influence, which I think the band should use more, as it makes them sound better. Although this is announced as a MLP it is well over 30 minutes so you really get your money worth. This is one of the few bands that know how to use keyboards on a small dose to overpower the music and not making it like a fairy lullaby. After a few listenings I can say that fans of second wave Black Metal with a definitive updated twist, great musicianship and killer composition, will surely find this one interesting. www.facebook.com/gravespawnofficial, www.satanath.com/sodp