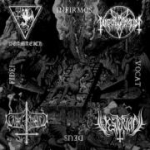 One year ago, while on tour with KHAOTIKA, WORMREICH lost two members in a car accident. Like the founder Vulk once said, "This is not the end of WORMREICH" and they are kicking off this four-way split release. The first track ‘Feeding The Ouroboros’ is a well-done occult Black Metal assault, somewhat chaotic in the vein of South American Black Metal. The two following songs are sadly not on the same level, more than once it seems the band does not really know what direction to take, it sounds half-baked and undecided. The next three songs are by DIABOLUS AMATOR, which try to sound like a EMPEROR in 1992 ("Wrath Of The Tyrant" demo). And yes, I must admit the sound and songwriting is pretty close to this special blend of Black Metal. Since I am still listening to more than 20 year old Black Metal demos, I like the tracks by DIABOLUS AMATOR. Other people may come to different verdict. GRAVESPAWN are, like the all bands on this output, hailing from the United States and offer some kind of blueprint Black Metal. Right in the middle of being boring and awesome. Middle-rate at every aspect, some may call it mediocre. The last band is VESTERIAN, a band which is, like GRAVESPAWN, not trying to reinvent Black Metal. The band is active since 1994 (founded as CENTURION) and it seems like they have not changed their style during the last 20 years. Something like the MOTÖRHEAD or AC/DC of Black Metal. Quite enjoyable for me, especially having all these Black / Death Metal hybrid bands, all this BEHEMOTH clones in mind. To sum it up: this release gives every Black Metal fan the opportunity to make an acquaintance with four genuine Black Metal bands. For more information on each of the bands check out the following sites: www.facebook.com/wormreichofficial, www.facebook.com/diabolusamatorofficial, www.facebook.com/gravespawnofficial, www.facebook.com/pages/vesterian/194632807216852, label contacts: www.blackplaguerecords.com, www.satanath.com/sodp