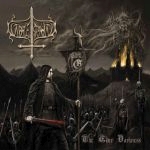 There have been members at one point or another in the band, but Reaver has been the mastermind behind North American Black Metal outfit, GRAVESPAWN, since its inception back in 2004. And so has been his vision of releasing a raw and corrosive type of music. “The Elder Darkness”, the third full length in the band’s career, is not too far apart from the well known Scandinavian style in both concept and execution. GRAVESPAWN prefers to keep things interesting and although fast parts are predominant, they mix in some slow and “marching” parts to widen their spectrum and also the atmosphere, which is the key in this type of Metal, in my humble opinion. It is good not to have the melodic tremolo riffs dominating the guitar department. There are some interesting segments guitar wise, using open and heavy riffs to accentuate the melodic feel, rather than “in your face” audio violence. Actually, I found myself liking the mid paced and slower parts of the songs a lot more than the blast beats, although the use of keyboard pads and melodies do bring a breeze of fresh air in between the density of the music. In “The Elder Darkness”, Reaver takes care of keyboards, vocals, rhythm guitars and bass. And he has done a really fine job, especially with his vocals, combining the high pitched shriek with deep growls. His performance has the correct attitude and his composing introduces enough new elements first, to keep things within the Black Metal realm, but also, without alienating possible fans seeking exactly what GRAVESPAWN has to offer. As guest members we find Advorsus playing bass on two tracks and a lead in one track and Baalgrath taking care of the drums, which he does in an excellent manner. His drumming is precise and sharp and keeps the songs from getting saturated. Production wise, the album sounds solid and has the right components: razor sharp guitar tone, the pounding (yet pretty natural sounding) drums and a heavy bass which is sadly a bit buried in the mix. I would definitively point out the keyboard work, which is amazing and brings some of these songs to another level. “The Elder Darkness” is a solid Black Metal album, nothing more, nothing less. Contact the band at www.facebook.com/gravespawnofficial and get their album from www.satanath.com