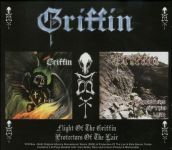 GRIFFIN
Flight Of The Griffin / Protectors Of The Lair
(Golden Core Records)
217:53min