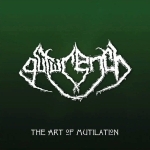 GUTWRENCH was a pretty fine oufit from the north of Holland. They were founded in 1992, when Death Metal already had its first peak and dozens of good bands emerged from the Netherworlds. Vic Records again decided to dig in the underground of this golden era and to make all the band’s efforts available again in form of the compilation "The Art Of Mutilation“. The guys released their first demo "Wither Without You" in 1993 and it already offered very solid and matured material. The presented six tracks offer US-styled Death Metal with a Dutch and sometimes Swedish painting. Means that in general their style was surely rooted in the US-school of bands like SUFFOCATION or OBITUARY but with a more technical approach before returning to Scandinavia here and there. The five songs including the title track of the compilation shows a huge abillity in songwriting, musical skills and a good taste for fine solos and melodies. The band could have grown bigger with some proper label support. The demo has been supported by Displeased Records back in the days but somehow GUTWRENCH also perished in the mass of releases, which is pretty sad as the material is very cool and the grunts get enriched by very cool screams. Track six ‘Asphyxia‘ was the band’s contribution to a Displeased compilation called "Antichrist Superstar" in 1994 and already showed a little development into a more technical and melodic direction but with all trademarks of their first demo. Tracks seven to fifteen offer the tracks of their second demo from 1994 "Beneath Skin" as well as three outtakes of this session. ‘Beneath Skin‘ already shows that the band was in the process to change their style like many other bands in that time. Death Metal was limitating the bands or they simply felt it is so and many bands changed the style into a more groovy or melodic direction. GUTWRENCH seemed to look for new options and sounds similar to CARCASS during their "Heartwork“ era appeared guitarwise. But listening to the material nowadays for me, they took a huge step into a more melodic Death Metal direction. I would not go so far to call it Gothic Death but their development can somehow be compared to what bands like BEYOND BELIEF or PHLEBOTOMIZED did back then but less weepy. The material is definitely very good and and also offers some fast tracks which should not have disappointed their old fans. But times were changing and so did GUTWRENCH. The material was definitely worth to get released at some point as their sense for fine melodies and good songwriting really is worth to check and makes this second demo "Beneath Skin“ a really fine journey into the past. ‘Scarred & Hollow‘ is a good example for their fine melodies with MORBID ANGEL like keyboards while ‘Cain‘ spreads an old PARADISE LOST feeling. If you like Dutch Death Metal and especially the doomed melodic version of Dutch Death Metal, this compilation is really worth to check. For more info, check one of the following sources: www.facebook.com/gutwrench-holland-243787062452594, www.vicrecords.com