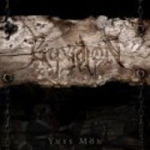 Pagan Metal has become quite popular within the last years, a fact which is easily recognizable by the last signings of the big Metal labels. Which started 15 years ago with bands like ENSLAVED, HELHEIM and EINHERJER and further cultivated by the second wave end of the 90s seems to be "Trez Chic" within the last years. The fact that a lot of fresh Pagan Metal bands had lately been signed to earn a piece of the cake seems obvious but I think that the Trollzorn members know that quality is much more important than quantity. GWYDION from Portugal deserved their record deal because even heading from sunny Portugal it’s more than obvious that Viking blood is rushing through their veins. Especially their singer Ruben gives their blackened Pagan Metal a touch of credibility that you can only feel but never touch. This is Pagan Metal in the old style but ‘Frost’ and ‘Av Norron Aett’ are good examples that Valhalla is just around the corner and only the short distance trip from hell. Even if this is the second great Trollzorn release reviewed from my side a good album is a good album and GWYDION debut is worth buying, so Vikings of the world unite and support this band from far, far South. www.myspace.com/gwydionmetal, www.gwydion.org, www.trollzorn.de