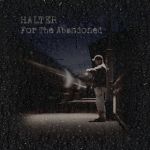 “Omnipresence Of Rat Race” was certainly a statement debut release by HALTER, that have been active for quite some time and playing Doom and Death in the old-fashioned way. After the debut release, they released an EP “Post Factum” and sooner the quintet came into collaboration with the keyboardist Marina Ignatovich and recorded their second full length “For The Abandoned”, with the same formation as the debut. “For The Abandoned” twists the sound of the debut in a much slower, drier compost, with well-worked forays into Funeral Doom. From the beginning, ‘… Of The Part Of Nature’ shows changes, where the bass stands throughout, which was not so forefront on the previous disc. ‘Hunters Brotherhood’, followed by ‘First Snow’ combines the epic groove of the guitars with the claustrophobic decay of Doom. ‘Pain Which Never Sleeps’ and ‘Keepers Of Persistent War’ further showcase the song crafting strength of the Russians. Certainly, the blends of atmospheric and instrumental sounds created by the keyboard empower the overall doomed and abandoned essence. Words needs to be added about Alexey Pyshkin’s voice that always comes in, to vibrates everything and producing grief-stricken moments. The ending with the almost thirteen-minute beast ‘Ode To The Abandoned’ will further establish that the production, mixing and mastering was honed as the compositions and atmosphere demands. The artwork of this record absolutely does not reflect the music that can be found inside but possibly it’s a mockery by the Russians about modern era and what it’s really abandoning for the sake of haste, greediness and gain. With all these, in this second full-length, HALTER further strengthen their visions and sounds to grow and to deepening their roots. MFL Records (specialist for Death / Doom records and part of Moscow Funeral League) ran by prolific Evander Sinque, released this second album worldwide (jewel case with 8-page booklet) and should receive admirations and support from any followers of the genre. Explore further about the band and label here: www.facebook.com/groups/halter.band, www.facebook.com/mflrecords.