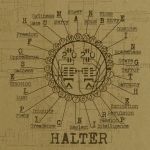 HALTER
The Principles Of Human Being
(MFL Records)
40:38min

MFL Records are located in Moscow, Russia and the abbreviation MFL stands for Moscow Funeral League. So, the assumption HALTER are located in the area of Doom / Funeral / Death Metal is correct. Although HALTER, also from Russia, have a more modern approach towards Doom Metal. Just listen to the production, a clear and transparent sound, which can also be found on releases like the latest METALLICA album. And when it comes to the music itself, there is simply no overlapping with Black Metal. There are tons of bands intermingling Black and Doom Metal, but on the third full-length by HALTER you will find instead a heavy influence by modern sounding bands. If the music would be played a bit more faster some riffs would pretty easily fit to a traditional Heavy Metal band like HAUNT. But since the pace is more slow, the name PARADISE LOST pops up in my mind every time I hear “The Principles Of Human Being”. Quite exactly (March 1991) 30 years ago the Brits released their style-forming and eponymous second album “Gothic”. But HALTER are not only influenced by the early, but also by the newer works of PARADISE LOST. But in the long run HALTER can not keep up with the atmosphere and musicianship of more established Gothic Metal acts. Simply because it is too lame. Whether the deep grunted vocals nor the guitars are able to evoke a least something like a special feeling or sentiment. The music is like the band logo, boring as hell. 30 years ago an album like this would be ranked as mid-tabled, but it is 2021 by now and there a bazillion of bands to be discovered. More info at: www.facebook.com/groups/halter.band, www.facebook.com/mflrecords