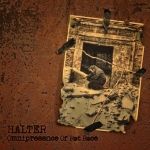 HALTER from historic Yaroslavl, Russia released their debut album “Omnipresence Of Rat Race” in 2013 through MFL Records and now it received a re-release in its original form by Wroth Emitter Productions. The band released their debut full-length without any prior releases, like EPs or demos, and it seems their sound is oriented towards Death, then Doom or vice versa. ‘Graves Are Not Full’ for example is much more Death than Doom. In some places they almost touch Funeral Doom peaks, as in ‘Of The Part Of Herd’ or ‘Zone Of Alienation’ and ‘Zone Of Alienation 2020’ (bonus track). However, in others the Russians delivered characteristic Doom with dark and cavernous howls and growls from the traditional schools. The tremendous length of the whole record never feels enormous, due to all the additional voices, words and sound clips, that make each of the songs individual pieces of Death and Doom, expressing mental death by social alienation, inner struggles and physical death from the forever disastrous war and after results of human imperfections. ‘Zone Of Alienation’ can immediately make anyone visualize that feeling of mental and physical death and feel the scary, intense events surrounding the Chernobyl disaster. Similar can be said about the eerie and ominous progression of ‘Wintry Day’. Interestingly, all the solos are almost in contrast to the mammoth riffs that surround them, soaked with Blues and Jazz infusions. The bass and percussions always stay in their places and support the song constructions like a thick layer, only to expose the doom and agony invoking harmonies and melodies of each composition. From the land of wisdom, menace and mystery, “Omnipresence Of Rat Race” is certainly a statement Doom Death release, and Wroth Emitter Productions did an absolute praiseworthy thing by re-releasing this debut offering by these unknown Russian hordes, that should be explored by all listeners of BLACK SABBATH, CANDLEMASS, SAINT VITUS and WINTER, DISEMBOWELMENT or ASPHYX. More about the band and label here: www.facebook.com/groups/halter.band, www.wroth-emitter.org.