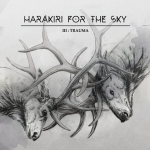 Despite the unusual name I never noticed HARAKIRI FOR THE SKY from Vienna, Austria. Like the title suggests, it is the third full-length output. Eight songs in 75 minutes, but no idle running or boring parts to discover and since they are not playing Doom Metal this fact is quite surprising. Of course the music has its slower moments, but there also many up-tempo parts, sometimes even blast beats. The guitars sound like a mixture of KATATONIA (both early and later) and ENSLAVED after the turn of the century. The structures are rather simple, which makes it easy to follow the music. No confusing rhythm changes and no weird influences, instead plain and simple music to enjoy. Although the atmosphere sometimes is rather melancholic, the music is far away from being sad and depressive. Mellow, maybe this term describes the atmosphere best. If the vocals would not have done in that gargling Black Metal style and if the songs would be shorter I guess a mainstream Hard Rock fan could easily enjoy "III: Trauma". If you like the later AMORPHIS and ENSLAVED and if you are not too "cvlt" to feel relaxed and be pleased about some fine music, then HARAKIRI FOR THE SKY is your band to listen to. www.facebook.com/harakiriforthesky, www.art-of-propaganda.de