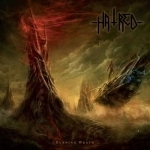 HATRED seems to be a very popular name when it comes to choosing a monicker for musical activities. The HATRED we are talking about here hail from Falerone, Italy and have been around since 2002. "Burning Wrath" is just the band’s debut album within their more than one decade lasting history. One fact might be that all members were / are quite active with their main / other outfits as this trio consists of very well known underground forces like BLASPHEMOPHAGHER and BAPHOMET’S BLOOD. If you are familiar with both acts mentioned before then you should already be aware that you can expect only traditional Metal in the old school way here. No trendy bullshit Metal which poisons our ears so often these days. After a few demos, the "Wind Of Annihilation" 7" EP (released on Iron Bonehead in 2009) and the participation on Heavy Artillery’s compilation album "Speed Kills… Again" in 2007 our Italian Thrash lunatics finally made it to unleash their wrath in form of a ten tracker. A fistbanging feast for all lovers of the good old Thrash Metal times of the past with a slight modern approach (mostly in terms of production). The trio gives us a lesson how that style has to sound like today. Despite marvellous playing abilities they keep it straight to the point and focus on the main thing – the songs. HATRED has the right ballance between technical approach and thrashing without compromise: precisely executed riffs with always a raw, violent and ferocious edge. They know their craft very well and adeptly using the experiances they made as musicians in the past. A big plus is the extreme powerful and fat production which builds up a real wall of sound. The guitars shred heavy, the drumwork is at full force and even the four strings are quite well audible. Tracks like ‘Deathmargeddon’, ‘Darkness’ or ‘Aggression’ are the right food to appease every headbanger’s appetite for bursting sounds. If you enjoy Teutonic Thrash squads or straight in your face thrashing madness then you should give this trio a try. Check out the label’s site at www.doomentia.com or just get in touch with A. Trosomeranus at extremehatred@libero.it.