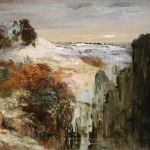 Since the beginning of following the bands in collaboration with Les Acteurs De L’Ombre Productions, it became a matter of trustfulness that the profound eyes and ears of this label can do no harm and always represent something out of nowhere. HEAUME MORTAL is not an exception, which is a personal project from France led by Guillaume Morlat (COLOSSUS OF DESTINY, EIBON, COWARDS). This record was composed between 2011 and 2014, which presents a retrospective on the early 90s and Norway, played with the rustic acoustic sounds in an attempt to express the everlasting and contradictory buried facets of life and nature. Razor-sharp, intense, bitter, reflective and gripping; these words can come close to describe its atmosphere but "Solstices" can be understood as an accumulation of many years work of original music, where a sense of decay and personal misery is being channeled out in forms of five original songs and a spirited BURZUM cover from the celebrated “Filosofem” album. With a mixture of vocals, sometimes almost experimental, accompanied by frosty dissonant atmospheres, it makes the music serve as a dark atmosphere of its own spheres, which can be appreciated while listening to ‘Oldborn’, ‘Tongueless (Part III)’ and ‘Yesteryears’. ‘South Of No North’ may feel like wandering around winter solstices whilst the closing track ‘Mestreguiral’ will establish the imaginative depth of this record. The beautiful art on the cover was painted by Gustave Moreau and encapsulates the total essence of "Solstices”, which is worthy to be exposed as the uncompromising attitude and inspired musicianship captured in this record led by Guillaume Morlat, will certainly invoke you to reflect deeply from within. Explore more about the band at www.facebook.com/heaumemortal and visit their label page at www.lesacteursdelombre.net.