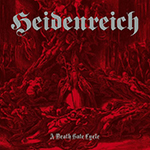 HEIDENREICH is a joint project, which was formed by ABIGOR and AMESTIGON members, in the late ’90s. Anybody aware of them, knows they are stylistically very close, so it’s not surprising that HEIDENREICH also celebrates a mixture of both on their debut work “A Death Gate Cycle”. That means Black Metal, drenched with electronic influences and a dreary atmosphere. Almost reminiscent of “Forever Alone, Immortal” by LUX OCCULTA, the primitive mid-tempo beats by the drum machine and the extensive keyboard experiment with samples, create a sort of occult setting that invokes strangeness and inquiry. The playing time is captivatingly divided into an outro and two neoclassical keyboard pieces. ‘The Prophet’s Sacrifice’ is characterized by the presence of gongs and timpani, while ‘Todeswish’ is dominated by a tranquil piano. Besides that, straight Black Metal songs, like ‘The Goat Shrine’, will also come along with all discordance and ear-piercing vocals. No wonder, the two members at the instruments on this album know this soundscape very well and now with this re-issuing effort by The Devil’s Elixirs Records, any unaware genre enthusiasts may find affinity with this short but extremely obscure effort. To see more about the band and label, visit https://heidenreich.bandcamp.com or www.facebook.com/thedevilselixirsrecords