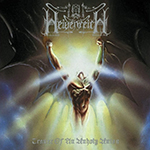 HEIDENREICH
Trance Of An Unholy Union
(The Devil's Elixirs)
41:31min

During the second half of the 90s Austria was a hotspot of the European Black Metal scene and HEIDENREICH was a side-project by Peter K., most known for his work with ABIGOR. The Ukrainian based label The Devil’s Elixirs, focusing on re-releasing old Black Metal albums, now published the two albums by HEIDENREICH. The present album is the second one, originally released back in 1999. As always, the question arises if it is really worth re-issuing old records. In this case, definitely yes! Because this album has everything that characterized Black Metal in the 90s. Starting with a soundtrack like intro, typical tremolo picking guitar work and a heavy use of keyboards / synthesizer to evoke a gloomy atmosphere. Especially the interspersed movie samples are definitely a highlight, because they are really scary and far away from the usual wannabe evil stuff. Since these are all in the German language, listeners who do not speak German will naturally have their problems. But for me those samples are amongst the most darkening I have heard on Black Metal releases. Another aspect that was typical of the Black Metal scene at the time is the prevailing eclecticism, which means influences from everywhere are combined to forge something new. On the musically side clean singing, non Metal instruments like piano and songwriting far away from the verse-chorus-bridge scheme. And no prisoners are taken in terms of content either. For example, you can translate the band name with “heathen empire”, while at the same time Satan is praised. Not quite consistent. But that’s how it was back then, when a troop of young musicians set out to conquer the world. It does not always fit together and it crunches in a few places, but the energy that is released is impressive. So this re-release makes sense for everyone who wants to feel like they did back then and for those who, for whatever reason, missed the second wave of Black Metal (fans of Heavy / Epic Metal might recognize the cover artwork, since it previously had already been used by Long Island based VIRGIN STEELE for their “A Cry In The Night” EP from 1983 – Frank). More information and music can be found here https://heidenreich.bandcamp.com and here www.facebook.com/thedevilselixirsrecords