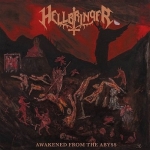 HELL(BRINGER’s second full length) AWAITS! I guess this short introduction should give you all the information you need to get a picture of what this record is all about. Delivering their second LP “Awakened From The Abyss”, HELLBRINGER excessively worship SLAYER 1985 and thereby create one of the Thrash highlights of 2016. The record starts off with typical feedback noise that collapses into the ‘Fall Of The Cross’ which is exactly the opener one expects when looking at the twisted cover delivered by Samu from SWALLOWED (are those guys still active???). ‘Coven Of Darkness’ reveals some ‘Captor Of Sin’ similarities while ‘Realm Of The Heretic’ takes its influence from ‘Praise Of Death’. To make things clear, these tracks are neither rip-offs nor cheap copies but rather great Thrash songs worshipping the masters during their strongest period. ‘Iron Gates’ does not particularly remind of any "Hell Awaits" track but still possesses this evil charm while delivering spine-bending mid-tempo riffs. ‘Specter Of Rebirth’ comes with a killer whirlwind intro that culminates into evil riffs which again stay away from hyper-speed. ‘Awakened From The Abyss’ is my favorite track because of the severe amount of energy and darkness. Great riffs, great songwriting, great overall performance! ‘Dark Overseer’ finishes the record off with a great intro followed by total thrashing madness. Definitely a worthy closer. ‘Awakened From The Abyss’ not only delivers great 1985 style Thrash but also has the perfect production as well as the perfect playing time, which is something rare nowadays. This is definitely a record every self-proclaimed captor of sin has to check out! www.facebook.com/hellbringeraus, www.hrrecords.de