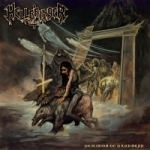 The golden rule of Australian Black / Thrash probably is “stick to your roots” and whether you listen to GOSPEL OF THE HORNS, DESTRÖYER 666, SHACKLES, ASSAULTER etc. you will always find a healthy dose of Teutonic Thrash inspired by the Germanic “big three”, classic slaytanic US aggression, some POSSESSED or early Black Metal like VENOM, HELLHAMMER, BATHORY in differing mixing proportions. Not to forget some South American influences as well! Same goes for the mighty HELLBRINGER whose ass-kicking debut album “Dominion Of Darkness” also positively reflects Australian Thrash heritage with references to the darkened crunch of ARMOURED ANGEL (whom they covered on the previous EP, too), the raw memorability of early MORTAL SIN and recently reformed “Hell Awaits” worshippers HOBBS ANGEL OF DEATH while ignoring the blackish elements and trading them in for loads of SODOM! The latter manifests especially in the vocal department which is incredibly angelripping while the riffs slit your guts in a furiously fast fashion and – that’s what I consider a big plus of this opus – don’t ignore fist-pumping, headbang-able mid tempo, too. The drumming is effective and straight whereas the songs themselves are well composed, catchy yet flavored with some occasional lead guitar melodies (‘Necromancer’s Return’), ear-piercing Metal screams (‘Bell Of The Antichrist’) for a good amount of variety. Sure, there’s Australian Black / Thrash a plenty out there, but once you have heard songs like ‘Sermon Of Death’, ‘Deceiver’s Chamber’, ‘Rites Of Evil’ or the powerful yell-a-long number ‘Satanic Destructor’ (great melodic break in the middle part!) you will immediately agree that this is easily the finest album released in the genre this year! “Dominion Of Darkness” might lack innovative potential but as there is not one weak track to be spotted on this record, I’d say “Fuck it!” – this is a killer piece of driving, at times epic and overall nicely gloomy Oz Thrash I will proudly place between the “Master Of Puppets” of Australian Metal – DESTROYER 666’s “Unchain The Wolves” – and the HOBBS ANGEL OF DEATH debut! Rounded off by a flawless production by Harris Johns (that man should produce EVERY Thrash album to save us from stale, sterile sounding records) and a fantastic cover artwork, this is simply a must have album for all maniacs possessed by Thrash! Hail HELLBRINGER here: www.facebook.com/hellbringeraus – order the album here: www.hrrecords.de – listen to ‘Sermon Of Death’ here.