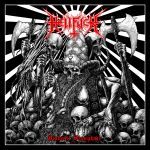 I think that all cool names for bands have already been taken somehow. So if it is not a name in a different language than your own that sounds good, you just don’t give a single damn thing and choose whatever you think will fit. That’s the case with Polish HELLFUCK who definitely took an easy route to give a name to their band. But, then the music comes and oh boy, we are in for some good surprise. You see many bands try to give respect to the elder gods, by copying them to the bone, or being too obvious in their influences. And I am all good for that, specially when those old bands are just a mere shadow of what they were. That’s where this band does it right. KREATOR is a big band now, but nowhere close to their essence of old… and SLAYER is no more and they hardly hit the majestic sound of the late ’80s the last decade… and here it is where HELLFUCK comes. Formed by various musicians who have a lot of experience, it is no surprise this debut album came out as it is. Killer Thrash Metal that borders with ancient Death and Black Metal sounds, with a perfect production and killer execution. The guitar tone reminds me of their land mates VADER and maybe the vocals a bit too. And although their main influence are the German bands, there is also many American Thrash Metal sounds, but think about the rougher Thrash / Speed Metal bands. And to add insult to injury, yes I can sense a bit of rabid Hardcore sounds, just the right amount, both in music and vocals. Now, they deal in their lyrics with darkness, hell and violence, which is the right way to go with the music. Yes, I know that there are countless bands playing a very similar style, but believe me, this is without a doubt in the top performers of the style. If old KREATOR, EXODUS and INFERNÄL MÄJESTY with touches of CRO-MAGS were put in a static cauldron of doom, and a ritual of blood and sex was performed in a pentagram, something like this would be created. Put this in a contender for best album for 2022! www.facebook.com/hfband666, www.facebook.com/godzovwar