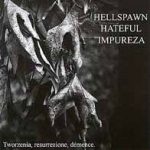 Another slab of great underground Metal presented by Nihilistic Holocaust is what we have here. All three bands play heavy and fast Death Metal which owes to both the North American variety akin to newer MORBID ANGEL as well as Brazilian Speed Death Metal. The first five songs are taken from the demo 2005 of HELLSPAWN from Poland (actually I first thought this might be the defunct band of the same name from Brazil). Fast and brutal Death Metal is the game here, as already hinted at with a solid MORBID ANGEL base, played in a fericious way which reminds me of bands from South America, some blast passages let me think of RAVAGER for example. The vocals are deep and a tad bit muffled, nothing overly original but very appropriate. The riffing gets crowned by some cool solo runs here and there which are not unlike the chaotic outbursts of Trey Azagthoth or Gene Palubicki, yet it should be noted that the band does not blast away exclusively. Heavy parts with fast double bass drumming can be found here as well as some staccato riffing, nevertheless the overall tempo is fast. Some minor chord work sounds slightly blackish at parts. Nothing groundbreaking but a massive demo for sure! All relevant info and two songs can be found here: www.hellspawn.metal.pl. HATEFUL from Italy really deserve their monicker: fast and technical Death Metal with evil breathy midranged vocals and a slight Thrash note. The arrangements are by far less straight forward than those of HELLSPAWN but more twisted with little bits of change in the time signature during the riffs. With plenty of breaks, blasts bridges and lots details this band will surely appeal to fans of brutal (semi-) technical Metal who can dig acts like CORONER and IMMOLATION as some of the riffing, rhythms and the incorporation of disharmonies branch out a little further here. Only three tracks are offered here – let’s hipe there will be some more in the future. www.hateful.info. IMPUREZA surprised me quite a bit: the band hails from France but sings in Castillan… of all bands here they sound the most like a South American band crossed with some NILE influences. But wait – what is this? A Flamenco guitar? Yes… IMPUREZA incorporate Spanish Flamenco rhythms and scales in their songs and they do it bloody well without sound the least bit pretentious. This split contains songs from their demo 2006 as well as three bonus tracks from 2005. IMPUREZA also play slightly technical as their songs are varied with blasts and breaks. Some people might have a problem with the Spanish vocals but personally, I think that this language fits very well with this kind af brutal and heavy kind of Death Metal.Their homepage offers two tracks to get an impession so go there. www.impureza.fr.fm. Clearly a collection of demos for fans of dark underground Death Metal, that strange kind who still buy 7" and tapes, hehe. For me, this an excellent release – well done! http://site.voila.fr/NIHILISTIC/

Related reviews / interviews:
• HELLSPAWN - There Has Never Been A Son Of Me (Thomas Meyer) • HATEFUL - Coils OF A Consumed Paradise (Ulrich Kreienbrink) • IMPUREZA - Reincremation (Frank Stöver)
Back Report errors Print