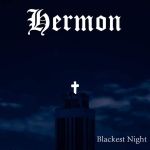 Argentina’s HERMON originally formed in 1993, broke up in 1996, then reformed in 2018. That’s a bizarre active history for a band. And there were also no releases prior to their first full-length “Blackest Night” released in 2019. But you know what? It doesn’t really matter. However, the band consisting of Nan “Noctambulo” Herrera (vocals, guitars), Ricardo “Hell” Amend (bass) and drummer Devas (who’s played in about a million bands) apparently share a love for a band we all are familiar with. The album opens with ‘About The Dark Hours’, one of my favorite DARKTHRONE tunes. And as I wondered why HERMON were beginning their album with a cover song, I realized that this isn’t a DARKTHRONE song after all. Thirty seconds into the album and the wheels in my head were spinning backwards. I mean, those are Nocturno Culto’s vocals, right? Gotta be. But as I researched the band, I discovered they have nothing to do with DARKTHRONE but in sound only. Now if you want something different, don’t look here. But if you just have to embrace the DARKTHRONE sound, then HERMON is definitely for you. I mean, when I say they sound exactly like DARKTHRONE, I’m not shittin’. ‘Funeral Black Winter’ (good song title!) channels DARTHRONE. ‘Thinking To Kill’ channels DARKTHRONE. ‘Blacken Fields’ channels DARKTHRONE. And… you get the idea. The band apparently isn’t hiding their love for their Norwegian cousins. I mean, EVERY FUCKING SONG sounds like DARKTHRONE. BUT… Once you get past the obvious influence, “Blackest Night” is actually a damn enjoyable album. Maybe while waiting for the next album by… well, you know… give HERMON a listen. You’ll think Fenriz and Nocturno Culto are as strong as ever. Never has a band sounded so close to who they’re attempting to sound like as HERMON do. And it surprisingly works. Now… about that terrible band name… (hmm, it seems I haven’t really paid enough attention to DARKTHRONE in quite some time, but to me there’s also a lot of “Morbid Tales” era CELTIC FROST influences to be found on this album, especially in the opening track ‘About The Dark Hours’, but also in the very strong Tom G. Warrior vocal worship throughout the entire record – Frank) For more information, please check out www.facebook.com/hermon-black-metal-183876585863641, www.facebook.com/sonsofhellprod