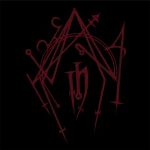 French horde HYRGAL is active since 2008 already and return to the scene with full-length number three, simply entitled “Hyrgal”. Their sound is based on classic true Black Metal in the vein of the Norwegian school, but in a pretty modern interpretation. Paired with influences of Post Black Metal they come even close to a kind of melodic approach, but with their raw background, they manage to create a very intense version of Black Metal, with a menacing and cold atmosphere and sharp riffs enriched by intense caws. Especially when they slow down and focus on the atmosphere, it really gets grim and cold. The intro of ‘La Foudre Puis La Nuit’ sounds like a soundtrack of old horror films before they unleash their post-painted Black Metal with its mesmerizing beautiful guitars. Definitely HYRGAL is not the easiest stuff to listen to as it is far away from stuff like DARK FUNERAL or MGLA, but definitely easier to dive into compared to really difficult Post Black Metal. Also a fact I definitely like is that when I listen to the seven tracks, no other bands come into my mind that sound similar to HYRGAL, so they definitely managed to find their own sound. Sure, you hear the modern school founded on old grim Black Metal, but they created their own sound and this makes the album worth to check, as tracks like ‘Vermines’ or the doomy ‘Serment De Sang’ are really nailing it and fans of modern Black Metal should definitely check the new album out. For more info, follow the following dark paths: www.facebook.com/hyrgal, www.facebook.com/ladloproductions