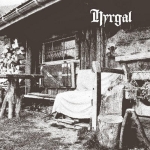 Every few weeks, there’s a new or unknown act from the blooming French Black Metal scene that crosses my path. Today I’ll tell you something about the first album of HYRGAL from the region Var near the Mediterranean Sea. The three-piece was already around about ten years ago and released a demo recording, but split up soon afterwards. Yet they re-started two years ago and recorded their first album “Serpentine” for German Naturmacht Productions. Now the album is available again on vinyl and CD from premier French Black Metal label Les Acteurs De L’Ombre Productions. It seems that no French Black Metal band with class will not have at least one release for this devoted label. And HYRGAL for sure is a band worth listening to, if you’re into the recent French school of Black Metal. Compared to other French acts of the genre, HRYGAL are more based on “trve” Black Metal. Yet the influences of Post Black Metal and Blackgaze are very present in their sound as well. Thus “Serpentine” lives from the dark atmosphere and the very piercing guitar harmonies, that often just slightly vary from the starting pattern. These guitars add a very cold wind to the darkness of the sound. On the other hand we find longer calm atmospheric parts, like the instrumental opener ‘L’Appel’ or towards the end of the following ‘Mouroir’ that create a certain solitude that calms down the storms of the cold guitars. A different pattern to reach a similar aim can be found in ‘Till’, where the speed is slowed down in between. ‘Représailles’ even has some darker epic parts and very remarkable guitar parts in Blackgaze style, while ‘Aux Diktats De L’Instinct’ is more on the rawer side without forgetting the great guitar work with harmonies full of cold beauty. The short ‘Interlude’ reminds me of the one typical NECROS CHRISTOS, yet it is only the calm before the final epic ‘Etrusca Disciplina’, a rather complex beauty full of turns and great harmonic moments. This one sums up the qualities of HYRGAL, including the rather genre typical, yet fitting vocals. In my humble opinion, “Serpentine” is one more fine example of the contemporary great evolution of the Black Metal scene. Check this album and these guys out, either at www.facebook.com/hyrgal or at www.lesacteursdelombre.net