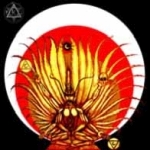 I have the debut CD of this Finish band somewhere around, and I was sure they were playing Black Metal, quite raw and primitive, with a few old school Death Metal touches. Now this two man band unleashes their second album of mystic Black Metal. They seem to be comfortable at mid-speed, with almost hypnotic and trance-riffs, with a wicked melody under the soul of these compositions, spiced with a quite raw but energetic production, that makes an emphasis in the dark and morbid atmospheres conjured by the band. To compare it to any other band proves a good task, as few really do possess this kind of aura IC REX is capable of, with agonizing vocals and laments, but the early Greek Black Metal bands could be a reference as well as maybe some bits sounding like DARKTHRONE. They do speed up a bit on songs like ‘Väkivaltaisten Tulien Hehkussa’. Oh, yes, all of the songs I suppose are written in their mother tongue, but I quote the band that “The theme of the album is to display the spiritual process of alchemy from a regal, Left Hand Path perspective, that preserves the Lucifer-Ego instead of its dissolution into the universal solvent.” Whatever that means. Slowly the album translates into a ritual inducing experience, where Black Metal, primitive Death Metal and some really well crafted songs combine. IC REX stands for “The king of Ice and Fire” an almost impossible combination of frozen and burnt memories. In the Black Metal field few things are released sounding as fresh as this one. It is time for me to get a new listen to their previous album. Meanwhile, you must do the same if you are into intelligent and occult Metal. www.hammer-of-hate.com, www.icrex.fi