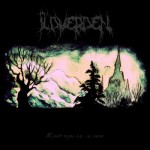 If your Cyrillic isn’t that good, the title of this Ukrainian band’s fourth full length album means ”Black Midnight Follows Me”, and was released last fall in co-operation with Pagan Flames Productions, though has finally washed upon our shores. The band is a one man attack lead by Human Unknown, who actually does a quite good job. We are getting a good slab of traditional second wave Black Metal with a little local Folklore mixed into it, I reckon. Most of the way through the music is quite traditional and follows already trodden paths, spiced up once in a while with atmospheric parts, which is a nice variation for the mostly aggressive and pounding Black Metal. Though we aren’t getting anything we haven’t heard before, the production needs a little punch to deliver the music, with the desired power and impression. We have some good riffing, I really like the vocals used throughout the 5 tracks, and even though the songs are quite long, the variation is keeping them alive and interesting, with some good twist and turns. The programmed drumming is often sounding as it should, but once in a while, a tad to frantic and machine-like. That might be the idea behind it, though it doesn’t catch onto me. A Black Metal album following proved standards, with some good songwriting, twist and turns, to make it somewhat interesting for rabid followers of the scene, I am pretty sure I will give it some more listens, when I’ve written the last word here, as some parts of the album entices me. Follow me into the black midnight: https://myspace.com/ildverden, www.satanath.com