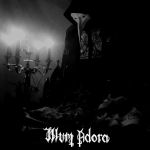 ILLUM ADORA, a traditional Black Metal band from Germany, was founded back in 2011. It is the sole brainchild of ZARATHUSTRA vocalist Hurricane Hellfukker and their last known line-up was replaced by session musicians from different countries as Dutchman Mortüüm (drums, COUNTESS), German Shargaz Isidor (guitarist / vocalist, UNHOLY WAR), Jormundgand (bass, IN CORPORE MORTIS) and Dutchwoman Haxa (keyboards, COUNTESS). With such a diverse international companionship and adding Mr. Hellfukker’s profound idology and uncompromising aptitude, the band paid a creative homage to the old school Black Metal, but always with their personal ideology and visions. "… Of Serpentine Forces" is now the first full-length studio album they offered after two demos, an EP, a split with MORTE INCANDESCENTE and a live album. The album was mastered by Patrick W. Engel at Temple of Disharmony Studios (WEDERGANGER, URFAUST, SARGEIST and PROTECTOR) and now released in association with Folter Records (Germany). This debut album with its 40 minutes playing time is as diverse as some other band in their whole career can aspire for and its raw, intense and invocating atmospheric music truly serves the grand purpose of the once glorious underground scene. After the first exposure to this record, if anyone claims that this was a missing relic from the 90s underground, nobody could shrug off the idea immediately as above all the record sounds pleasantly natural and down-to-earth. Initiated with an impulsive and brutally high speed opener ‘Dominions Of Spheres Beyond’, which will remind of KATHARSIS or URGEHAL until acoustic guitars appeared in the middle and takes the track on a startling melodic turn. As the whole record will feel like a whirlwind Black Metal trip; once raw, wild and thrashy old school Black Metal will be experienced in the song ‘Nihil Negativum’, while melodic and spellbinding choruses can be found in ‘Clashing Of Swords’ and ‘Hic Sunt Dracones’. ‘Forever Dying But Never Dead’, on the other hand, is an example for the other extreme of the album, where raspy vocals of Hurricane fit perfectly in this aggressive, barbaric Black Metal mess. Without any doubt this record strengthened by musicians of the Dutch cult band COUNTESS, which can be easily felt in the title track ‘… Of Serpentine Forces’ as it moves with ritualistic modes and trespass the territory of orthodox Black Metal bands, while rampant ‘Slaves To Existence’ builds up with thrashy elements and then ends with a spoken words passage (excerpts from Johann Wolfgang Goethe’s ‘Prometheus’) lead by an affecting lead guitar passage, which will get stuck in your head for days. ‘Under The Iron Of The Moon’ will reminisce old WATAIN but you will taste the abhorrence it possesses onward its progression. This record ends with ‘Tiusche Man In Wieße Thorn’ which initiates with a blood freezing intro and fittingly progressed towards the end with a spoken words passage (from Friedrich Nietzsche’s ‘Thus Spoke Zarathustra’). “…Of Serpentine Forces” is a ruthless and memorable album that deserve praise and should bring great pleasure upon repeated listening. It might not be counted as a masterpiece now, but without any doubt it’s an engrossing album created by an enticing band that shall be explored by all genre faithfull’s. Explore more about the band at www.facebook.com/illumadora or visit their label page: www.folter666.de.