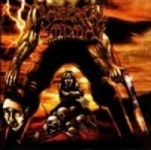 Stupid bandname, stupid album title and incredibly stupid coverart… those were the first three thoughts of mine when I got a copy of the first full length of the South France based four-piece IMPERIAL SODOMY (a mini CD with another stupid title – “Piss On Love” – already got released back in 1998). Luckily the guys’ music ain’t exactly of a similar poor quality. Too bad though that their drummer constantly seems to be in a hurry, as he’s playing high speed all the way through, which doesn’t really leave much variety possibilities in the songwriting department for the other members. Doesn’t make any sense to me to play extreme just for the sake of it… Hmm, maybe it’s because they name BRUTAL TRUTH, SUFFOCATION and ANGEL CORPSE as sources of inspiration?! Who knows… Other than that, this is the typical type of brutal Death / Grind Metal the American way with a deep growling vocalist and lots of furious intensity. So, not necessarily an essential album… Contact and ordering info: promo@criminal-recs.com