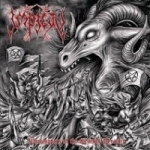 One song. Over 38 minutes. A daring thing to do and more if your style is quite limited like extreme Metal. Done right, and it can be something that generations and the nocturnal wind will be speaking of for centuries to come… done wrong it will be burnt to ashes to never raise again. IMPIETY, the ancient armor hold by Shyaithan that has been a multi national band for well over the last few years (where Italians, Brazilians and Mexicans as well as native warriors from Singapore, have helped with their devil swords) thus making this band more a project with very special guest musicians. The music style of the band has also evolved in all those years, from a primitive Black Metal to a more modern sounding ANGELCORPSE-esque Death / Black Metal band. At least the last three albums have been in a very similar style, and while intense and aggressive, at times they do sound a bit like the same. And most of the time it was all speed for the sake of speeds. Probably this was the reason to take a quite different approach with this one. To start with, there are traces of their older Black Metal style, more so than in previous works. Yes, there is still a heavy MORBID ANGEL sound all around, but also, and this is quite new for IMPIETY, a lot of interludes where the band slows down to a speed rarely heard in their previous works. In fact, I must add, that sometimes the band shines a lot more in those slower, very heavy moments, where even the vocal style is changed to fit more the momentum, thus reminding at times in style to older CELTIC FROST in the very own style of IMPIETY… thus making this record a lot more interesting and diverse than their last 3 full lengths. Still, there are many parts that sound a lot like their last albums, which actually are the weaker part here. IMPIETY has prove that they can play in a different tempo that just a speedy one, if they are wise to explore more that side without loosing their aggression and hatred towards humanity, we are in for a possible future spell of massive destruction. A bit hard to swallow in one take, but this one grows like a bleeding corpse. Even if you didn’t give a damn about the band, give this a try and you might end up surprised. All further info you may find here: www.mightyimpiety.com, www.myspace.com/impietyofficial, www.agoniarecords.com