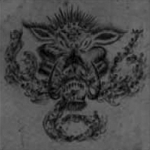 Aaaaaaaaargh, finally the best band to ever come out of Singapore comes back, the gods of the most blasphemic, apocalyptic and totally Thrash influenced Black / Death Metal, which left me completely astonished with “Asateerul Awaleen” and its raw and brutal sound, and which rounded it with “Skullfucking Armagedon”, a pure piece of blasphemy. And their return is exactly as I wanted, going back to a sound much more similar to that last album I mentioned or “Kaos Kommand 996”, and leaving a bit the Death Metal touches of “Paramount Evil” behind, which wasn’t bad at all anyways. The album opens with ‘Genocidio Primero’, and it’s like opening the gates of hell, the blastbeat assault starts, horrid vocals as they always used and fucking mad riffs, with hyperfast solos à la SLAYER, but even more crazy. There are no nice details of any kind nor time for breathing, only an avalanche of blasphemies one after another, like vomiting a hundred times on the throne of Christ (what did you expect with a title as ‘Vomit Jehova Vomit’?). There’s no doubt that the drums are the best thing on this recording, they are incredibly brutal, there almost aren’t drumrolls with so much blastbeat and speed, and when he starts the guy starts to be tired he smashes some cymbals and starts again. Speed, speed and speed! Like a machinegun pulling down bodies one after another. There isn’t almost variation or innovation in all these. Who gives a fuck? These guys keep on hailing SARCOFAGO, BLASPHEMY, SEXTRASH, ANGELCORPSE (the vocals of Shyaithan are more and more similar to the ones of Mr.Helmkamp) or SLAYER in the best way, searching for the biggest musical blasphemy and abomination and forgetting the rest. Furthermore they play a cover of DARKNESS’s ‘Death Squad’, and in this case the vocals, being less extreme, remind me to the ones of Schmier from DESTRUCTION. For the ones who didn’t like them before, they won’t do it now, but if you had a good time with their previous works I don’t think you’ll be disappointed. This is more from the same, pure agressiveness. It’s funny, in the track ‘Aten… One Upon’ (which is a bit slower and more varied), they use some Arabic melodies which make them a bit similar to MELECHESH. www.agoniarecords.com