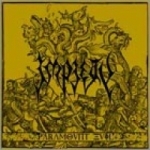 Worshippers of the band’s Black Metallish past (e.g. on the early EPs and the album "Asateerul Awaleen") must have had a hard time with IMPIETY’s musical development the last couple of years. "Skullfucking Armageddon", their second full-length, was a pretty thrashy yet pitchblack and violently raw masterpiece whereas the third attack "Kaos Kommand 696" was – at least in my opinion – a total disappointment lacking structure and revelling in pointless chaos, which was certainly inspired by the mighty ANGEL CORPSE, but was far from the US masters’ quality. On "Paramount Evil" this influence has prevailed and structure as well as quality have returned. What I consider rather new to IMPIETY’s sound is this epic, martial feeling emerging from many of the eight songs, in addition to that the pretty melodic solos are quite surprising when you know the band’s previous onslaughts. IMPIETY’s newest effort stands ultimately in the tradition of later MORBID ANGEL, ANGEL CORPSE and offers technical, dark and aggressive Death Metal with relentless blasting and slower, sinister passages to equal parts and does not get chaotic anymore. Who knows and loves the aforementioned bands should definitely try this album, diversified songwriting, a crisp and clean (almost too clean) production, tasteless lyrics and a tasteless artwork make it a pleasure in every respect. Of course the "tasteless" is not to be misunderstood: the controversial concentration camp collage on the front cover, the "Arbeit macht frei"-slogan inside, as well as countless pictures of mounted bodies, the photos of "Zyklon B"-cans should have been avoided, a Nazi band could not have had a better layout, this is the cheapest way of causing controversy and a line in the song ‘Carbonized’ definitely needs explanation: "And so, is this all a heinous crime against humanity? We applaud the wanton brutality, Anti-Jewish supremacy!" www.agoniarecords.com; http://listen.to/impiety