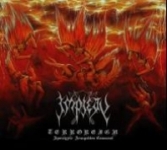 Ad Arma, Ad Arma people of Singapore – the beast IMPIETY is unleashed again. It’s reassuring that the underground can still count on bands like this wild horde from Singapore (with some Brazilian support on the guitars by Rangel Arroyo from ABHORRENCE) and their ultra aggressive Black / Thrash Metal is so raw that really nobody would dare to talk about trend. IMPIETY have lost not the slightest amount of speed & aggression during their 19 years of existence and their sixth album – not counting their uncountable amount of EPs or the 2007 live album – is like a flawing torch directly from hell. The album starts with a short intro generously composed by BEHERIT mastermind Holocausto Vengenace followed by the 3 minutes killer song ‘Vientos De Holocausto’ which gives the listener not a single chance to breathe. But nobody can win a war against Christianity with only one weapon so IMPIETY has also concentrated to spice their music with a lot of leads to avoid extreme similarity within their 8 songs. The MORBID cover ‘My Dark Subconscious" (from their 1987 "December Moon" demo) as the final track is more a tribute to these dark days than everything else. This is the way 80s inspired Metal (in general) should sound, nothing for pussies but real Metal for real Metalheads. www.agoniarecords.com, www.mightyimpiety.com