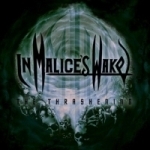 Well, well, well… oh my, looks like I lost my hard-earned 200 Canadian dollar bet (any takers for it, ha!) when I was predicting that Aussie Thrashers IN MALICE’S WAKE won’t have to release their next album on their own, simply because their debut album "Eternal Nightfall" blew my balls out of my pants in May 2009, approx. 2 years ago. IN MALICE’S WAKE’s frenzied, extremely skillfully played and tricky Thrash Metal on "Eternal Nightfall", definitely did blow so many other 2008 / 2009 period released albums out of the water – and therefore it’s very easy for me to say it’s a fuckin’ screaming crime (preferably put the latter mentioned 5 words with bolded capital letters if possible) they still haven’t been snapped by any label. Shame on you (supposedly completely deaf) label owners; you were offered a pot of gold and none of you understood the true value of it. Feel so sorry for you for that, I really do. With the band’s follow-up record, titled "The Thrashening", I am gonna double my bet for 400 bucks in a good faith in believing that now there surely is enough of sort of 5-star evidence for IN MALICE’S WAKE’s uttermost, true potential to show the whole music world, which ingredients they are made of: 100% unyielding hardcore talent and determination to make things happen for them, bringing the band on the next level of getting recognized even on a wider scale worldwide. It’s as simple as it sounds like really. "The Thrashening", consisting of 8 new cuts, bangs through all doors with such a maelstrom of catchy, hook-filled riffs, blistering solos, powerful vocals of Shaun Farrugia (who said that at times he sounds deceptively like the good old Chuckie-boy from TESTAMENT?), 80s styled aggressive gang shouts and such, that will undoubtedly leave many jaws wide open by sheer amazement – just only this time for good. With a new bassist Luke Blaso in the IN MALICE’S WAKE ranks, replacing Ben Withers who was putting his strings burning hotly on "Eternal Nightfall", the band sounds tighter than ever before, with its all four cylinders blazing like a soldering iron, ready to brand each of us for their eternal slaves. The guys have found the exactly right gears in the IN MALICE’S WAKE engine to put the big wheel going for them – and I would be lying if I said "The Thrashening" would leave some of you cold. No worries there at all, it does just the opposite – and there’s no question that you’ll thank me later for introducing this totally amazing Aussie Thrash Metal act to you. They have got everything – and I mean EVERYTHING on this fantastic recording that even a demanding Thrash Metal consumer wants from his / her daily dose of balls-y Thrash. This is THE Thrash Metal album recorded during this millennium that reeks of all kinds of perfection in sense of having it all hardened rubber-tightly into one top-notch package, making each of us to push a replay button like we would never get enough of them (which in fact – saying it honestly and the most humble way possible, has actually been the case for me with this record, ever since it arrived to me in the mail). It’s even relatively pointless to review this excellent Thrash record by sort of a track-by-track method because there are no fillers on "The Thrashening" – just killers, one after another. If you decide to not check them out – well, please by all means consider it only your loss then. Ugh, thus I have spoken the absolute truth about these new masters of Aussie Thrash Metal. Join the troops now and fight for them in order to get them signed to some caring label with some sense for a high-quality Thrash Metal. www.inmaliceswake.com