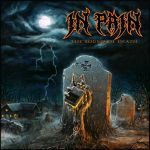 IN PAIN
The Sound Of Death
(Southcoast Productions)
43:32min

What would you expect from a Swedish band that has a cover artwork like IN PAIN: a rotten hand rising from the grave, holding up a guitar pedal that looks exactly like the famous Boss HM-2? Well, it is just that what you get from “The Sound Of Death”, the first album from IN PAIN from Anderslöv in Southern Sweden. We could close the file here, but it is not as easy as it looks. The story of IN PAIN started in 1992 already, the heydays of Swedish Death Metal. The first incarnation of the band released two demos before falling apart two years later. But guitar player Michael Andersson refused to bury the band completely and started IN PAIN again four years later with a whole new line-up, now taking over both vocal and bass duties. But it took the band 17(!) years and three more demos to release a first real recording for a label with the EP “A Call From The Grave”. Now, four more years and another EP later, IN PAIN finally released their first full length album. Thus it is no wonder that “The Sound Of Death” is what it is: an album so deeply rooted in Swedish Death Metal that it could have been released nearly 30 years ago without sounding much different. And back in the days, IN PAIN might have blown up some dust with this album. The typical buzzsaw sound of the famous pedal gets combined with crunching riffs and very fine drumming, full of fine fills and killing grooves that are the most striking speciality of IN PAIN. Songs like ‘Shallow Grave’, B.T.K.’ or ‘Zombie Front’ are a feast for the maggots and the still undead armies of those who dig this sound. Maybe some of you think it is nothing special to release an album like this in 2019 and they might be right. But I am sure that I’m not the only one in this world who still loves to listen to new songs in the old traditional style. Those like-minded should open their facebook accounts and visit www.facebook.com/inpain.sweden or www.facebook.com/southcoastproductionsscania