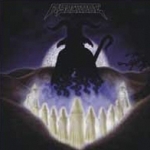 This time it’s not “Metal Of Death” from Uppsala, nevertheless IN SOLITUDE are part of the current Metal movement surrounding such acts as KATALYSATOR (now INVIDIOUS), DEGIAL or GRAVELESS as members of INVIDIOUS are also playing in IN SOLITUDE. This band, however, has nothing to do with Death Metal at all; the musical direction is even further in the past. Basically IN SOLITUDE take the biggest influences from early MERCYFUL FATE and some from CANDLEMASS in their “Epicus Doomicus Metallicus” era. For sure this is only half of the truth! On their selftitled debut album everything sounds like back in the 80s and this makes them as special as they can get. Everything fits in this concept, starting from the layout of this CD, to the lyrics, sound quality, riffs and song structures. The vocals, though not achieving the high pitched tunes of King Diamond, are great and just perfect for their music and complete the circle to make this CD a worthwhile purchase for every old-fashioned Heavy Metal fan. This Uppsala scene is a really productive one these days and the bands are out for something great if you ask me. To see a band like IN SOLITUDE play the opener on the last Keep It True festival should be reason enough to fully understand how great this band is. I really was surprised when listening to their selftitled debut for the first time and such killer tracks as ‘Witches Sabbath’, ‘Kathedral’ or ‘Faceless Mistress’ (just to pick three out of the eight songs) will keep this CD rotating in your player quite constant. The CD version was released through Pure Steel Records (www.puresteel-records.com) and the vinyl through High Roller Records (www.hho-records.de). Both versions should be still available from them or from any dedicated mailorder. Check out the band’s myspace-page at www.myspace.com/InSolitudeHeavyMetal.