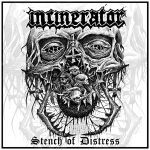 INCINERATOR, hailing from Netherlands, is a Death Metal unit that is relatively young in terms of founding and output. Bearing only an EP and a demo to their names, "The Stench Of Distress", released by Raw Skull Recordz, is the group’s debut full-length release. It is far too easy to pander to modern-day Death Metal fans by saying "The Stench Of Distress" is a solid mid-tempo Death Metal album with prominent groove elements and serious regional European flavoring. There is much more to this, as INCINERATOR have accomplished something highly unusual for Metal in 2017; they’ve released a full-length where every single song has some type of memorable character traits to it. One element that needs attention is INCINERATOR recording as a three-piece line-up. Jackhammer contributed bass, drums, and guitars to "The Stench Of Distress", with Necromancer and Bonesaw providing additional guitars and vocals respectively. All members deserve credit for the effort, but for Jackhammer to pull off three instruments in such a fluid, down to earth, and composition-minded manner is commendable. Opening with ‘At The Gates’, INCINERATOR skip the introductions and head right into battle, delivering a pounding mid-tempo performance that fits into the ASPHYX / OBITUARY mold well. Slabs of heavy chords are offset by soaring single-note tremolo lines, while drums pound away with a down-tempo thrashing delivery. Bonesaw straddles the vocal line between the throat-shredding delivery of John Tardy and the more chest-style approach of Martin van Drunen. ‘Nerveless’ and ‘Slaughter’ hit with slabs of rhythmic Death Metal riffing and go heavy on flurries of leads to create a chaotic atmosphere (btw: if you check out the tuning / riffing of the track ‘Slaughter’ you’ll easily notice why these guys named themselves after a song of the Canadian Death / Thrash legend – Frank). ‘Feed The Soul’ demonstrates the high limit INCINERATOR play at, like a shady gun dealer opening a briefcase full of illegal weapons, the song has all of INCINERATOR’s sonic qualities on display; leads, melody, harmonies, high-speed drumming, breakneck phrase changes and ugly vocals. The production is very modern… and fits perfectly, which is an odd thing to say about slick digital recording. The bass drum has a very dense and punchy tonal quality which sticks out as one of the dominant tones and lends a lot of gravity to the Thrash like beats. Guitars have a distortion reminiscent of the legendary Swedish Death tone, but with a reserved range, not as frontal as old ENTOMBED and DISMEMBER. The guitars are clear enough where palm-muted staccato notes still retain their vicious bass qualities but have enough ‘clean’ to their tone that the dissonant chords on closer ‘Swiersettiche Riten’ and the various melodies throughout the record have a bright, decipherable feel to them. INCINERATOR’s debut is a worthy addition to the European scene’s already busy 2017. For more info on INCINERATOR, check out www.facebook.com/pages/incinerator/510069052422555. "The Stench Of Distress" was released by Raw Skull Recordz, who can be found at www.rawskullrecordz.org