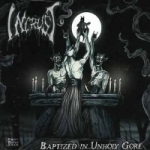 Discovered by INCANTATION’s John McEntee (= label owner of Ibex Moon) Brazilian hell horde INCRUST deliver exactly the sound you would expect of a label run by him: oooooold school Death Metal the way it should be! Obviously acts like SADISTIC INTENT, INCANTATION, IMMOLATION are the main musical influences of the unholy trinity formed in 1998 in Salvador and "Baptized In Unholy Gore", the band’s first CD release, compiles their two latest demos recorded in 2001 and 2003. Mastered by Roger Beaujard (MORTICIAN) at Primitive Recordings Studio the short, but sweet album sounds raw, dark and brutal as fuck and showcases an underground band that is a delight for anyone into the aforementioned bands. Straight forward riffing and drumming, very low and sinister growls à la early INCANTATION, memorable songs and a good dose of musical variation classify INCRUST’s material and though they aren’t the most spectacular newcomer the sheer quality of the songs and the uncompromising "fuck you, we’re Death Metal!" – attitude are convincing and sympathetic features of this act. Excellent band, that hopefully manages to release more material of equal quality in the near future, Horns up to INCRUST!!!! To check this out you’ll find a sound file at www.ibexmoonrecords.com