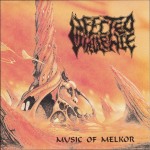 INFECTED VIRULENCE from Bavaria in Germany was another of the dozen talented hordes, that perished in the overkill of good Death Metal bands between 1992 and 1995, when Death Metal had its first peak and the very early protagonists of the scene already started to change their style or simply disbanded. Founded in 1991, the band released a killer self-titled demo, which has been bootleged these days. After this, the band continued to write songs and rehearsed as hell and finally self-released their first and only full-length album entitled "Music Of Melkor" back in 1994, which was limited to 300 copies back then. Untypical for that time (apart from being BLIND GUARDIAN), the band has dealt with Tolkien’s book Silmarillion as basis for their lyrics, which was quite unique for that time in the Death Metal scene. Raw Skull Recordz in co-operation with Ancient Darkness Productions saw the quality of this material and decided to reissue this little piece of German underground history. INFECTED VIRULENCE’s style was classic Death Metal influenced by bands like BOLT THROWER and MORBID ANGEL, with a slight note of technical Death Metal here and there. The album consists of some really killer riffing, mostly presented in slow oder mid-paced tempo but without sounding boring. Also they increased the groove a bit compared to their earlier material, which fits in quite well. The guitar work is solid and the drum work sounds very well and technical and combined with the sick vocals again a very nice trip back on memory lane. Considering the release year, the material is a piece of good old Death Metal with a bunch of nice songs and maybe with a proper label in the background, the band could have received some more credits back in the days. But as bands like ENTOMBED, CARCASS and MORGOTH already started their way away from Death Metal and hundreds of other talented bands appeared monthly in the demo sections of the well-known zines, the band stayed in the underground and also started to change their style in the mid-90s, before they officially disbanded in 1997. Anyway, there is still a bunch of lunatics out there, who like to discover old little treasures from the past for nostalgic reasons or even just like the raw sound of the 90s. For those, this release has been made available again. For more info about the band, please check the following sites: www.facebook.com/infected-virulence-1629716920640881, www.rawskullrecordz.bigcartel.com