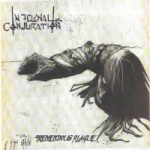 A Mexican newcomer delivering us old school Death Metal mentioning influences from bands as DEATH, AUTOPSY, PESTILENCE, MORGOTH, MORBID ANGEL, IMMOLATION, SEPULTURA, DEICIDE, SADISTIC INTENT or GOREFEST. Well, not the worst bands if you ask me. INFERNAL CONJURATION is a Mexican Death Metal band which started in 2006 with their brand of South American Death Metal. I was always a huge fan of South American Death Metal, just take bands as SHUB NIGGURATH, THE CHASM, MORTEM or NECROCCULTUS and you should know what I’m talking about. INFERNAL CONJURATION surely don’t reinvent the wheel, but especially considering the fact that this is their first demo I have to admit that this recording impressed me quite a lot. None of these South American Death Metal bands were technically skilled so much, but even more important than their musicianship was to create a certain atmosphere and that’s what I found here, too. Probably INFERNAL CONJURATION still need another demo tape before recording a first album, but talking for myself I will give them the time and will follow this cool band and will see how they develop. To be honest, it’s far more interesting and worth your money to support a band like this than your average Death Metal recording you find in every store. Get in touch with them directly this way and ask for the price of "Tremendous Plague": infernalconjuration@gmail.com or www.myspace.com/infernalconjuration.