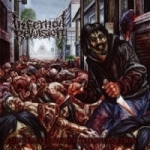 INFERNAL REVULSION are a Death Metal band hailing from Japan who have only released a self-financed single before this, their debut full-length for Goregiastic Records. These guys, like their fellow countryman VOMIT REMNANTS and INFECTED MALIGNITY, play US-styled Death Metal in the vein of SUFFOCATION, PYREXIA, DYING FETUS (early) etc… The first track on the album, ‘Leviathan’ is a really good instrumental song (this seems to be a trend with some Death Metal albums lately…) with some nice leads in the middle of it that got my hopes up for the rest of the album. The next song starts and everything is alright until the vocals kick in. Now I know a lot of people complain about brutal Death Metal vocals, but I happen to like them the vast majority of the time, and usually the more ridiculously low and guttural the better, but something about this guy’s voice grated at me. He has ultra-deep frog-vocals which are pretty high in the mix and kind of distracted me from the music, which is too bad because I actually enjoyed the songs. If the vocals don’t bother you then what you have here is some decent, albeit generic, brutal Death Metal with a pretty uninspiring production. For those who care, the cover art, which was fantastic, was done by Tony Koehl (GUTTURAL SECRETE, ABYSMAL TORMENT, SEPTYCAL GORGE). You can find out more info and buy the CD here: www.goregiasticrecords.com