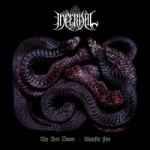 The name INFERNAL is not uncommon in the Black and Death Metal scene, since there is more than one band of that name (even Nasty Ronnie of NASTY SAVAGE used to sing in a band of that name – Frank). Here we are dealing with INFERNAL from Columbia, one of the oldest Black Metal bands from this still a little exotic, yet always vivid country. It is fifteen years now since they released their first album "The New Dawn", so it’s time for a re-release with some bonus material. Starting off with an acoustic intro, the opener ‘Force’ soon turns out to be a classic Black Metal song with some traditional Metal influences. These elements run like a common thread through the album, making it come close to DISSECTION, even though it definitely sounds different. The instrumental tune ‘Evil Milennium’ shows a lot of the musical variety INFERNAL have to offer here – with acoustic guitars and some epic keyboards it is hard to recognize the Black of the Metal here. On the other hand we have a song like ‘War Forever’, pure and fast Black Metal with typical piercing vocals. All in all a quite fascinating and varying album on a high level, only the last song ‘Power Of Circle’ is quite lame. As a bonus, we have the two songs from the "Majestic Fire" 7" EP, which was released in 1999 and was limited to 666 copies (of course). Rare stuff, indeed, but it is not as worthwhile to have, since ‘Unholy Wargod’ and ‘Majestic Fire’ were much more pure and raw, the sound of the title track hardly reaches 1980s demo level, just like the so called "Bonus from Hell", ‘A Titan Among The Giants’, which is nothing else than ‘Majestic Fire’, but in a longer, uncut version. Or is it just a mistake? I can’t tell, for I never ever heard the original 7". So, if you like some fine Black Metal with style and traditional influences and don’t mind the negligible bonus stuff, you won’t do anything wrong buying this re-release. Up to now, the CD is available only directly from the label for 20,- Euro (incl. registered priority air mail) at: arctthuro666ayms@hotmail.com. You might also check their myspace page for info and a first glance at their music: www.myspace.com/infernalblackmetal