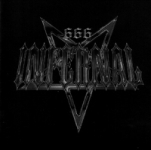 Already the 2nd mini-CD from the men around Blackmoon, this time as a taster for the upcoming album on Hammerheart in spring. However, I think that this release is quite mediocre. Two own tracks plus three coversongs in just a quarter of an hour do not really justify that this is being bought. The own songs, however, remind me of – surprise surprise – DARK FUNERAL, straightforward and without compromises to the point. Nothing spectacular but as DARK FUNERAL themselves will probably need until 2004 to bring out a new album, this might interest those who need a daily dose of fast Swedish Black Metal. I simply didn’t need any of their albums after "The Secrets Of The Black Arts", so I actually feel quite untouched. The songs that INFERNAL wrote should be satisfactory to fans. Then we have three coversongs, ‘Bleed For The Devil’ of MORBID ANGEL, which seems to be quite accurate although a bit straight for a MORBID ANGEL-song, but as I do not know the original (and probably half the staff might wish to kill me for this) I am not sure if INFERNAL (Alzazmon and Typhoon are ex-D.F. as well) are able to make this a worthy cover. Following is VON’s ‘Devil Pig’, which after all is the best song on this. And bearing in mind the ‘Satanic Blood’-cover on "The Secrets Of…" instead of looking for further INFERNAL-stuff I’d get my hand on stuff from VON. A sheer brilliant song. And finally we have another BATHORY-cover, this time their fan-anthem ‘Of Doom’. To be honest, I think ‘Of Doom’ is besides the intro the least cover worthy song on "Under The Sign Of The Black Mark" but I suspect it is the only that remained uncovered until now. This song nevertheless proves best that the production (done by INFERNAL what I expect to be Alzazmon’s homestudio as he has engineered etc.) is far from perfect and varying from song to song. This needs to be risen for the full-length. All in all, I think only recommendable for those who are caught completely by fast Swedish Black Metal, if at all.