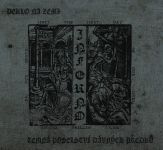 The country of MASTER’S HAMMER, always beholds a very distinct Black Metal sound unlike any other country. The same compliment can be bestowed to INFERNO. They came into existence in the mid-90s along with other notable Czech bands like MANIAC BUTCHER and the groups surrounding them. And from there, the Czechs built a monstrous discography. It’s notable that INFERNO got their start around when bands were skipping the Death Metal phase of their careers and Black Metal was known enough to just start in that genre. This works out great because INFERNO started off releasing a very solid demo “Peklo Na Zemi” (1996), followed up by another demo “Temná Poselství Dávných Predku” (1997). Both demos gained significant acclaim in the Czech scene and also gained their place in the forever alluring Black Metal underground. “Peklo Na Zemi” starts off with an intro, like a stimuli came from outside and immediately sets the tone for the upcoming four tracks. The title track ‘Peklo Na Zemi’, says everything about their creative process; which seems highly intuitive, natural and in accordance with both inner and external impulses. At times the music can have a sort of up-beat feel, yet the atmosphere creates a huge contradiction to this, because it is so dark in nature. And while INFERNO has fast sections, “Peklo Na Zemi” doesn’t depend on speed to generate the atmosphere. These are the signatures of a classic demo that set the foundation for this band. That strong beginning followed up into the second demo “Temná Poselství Dávných Predku” and it is certainly as worthy as the first, if not a little more engrossing. The original cover layout which was drawn by Barbarud Hrom of MANIAC BUTCHER, did immediately offer what is awaiting you inside. Musically this demo builds on what “Peklo Na Zemi” was trying to put forth and has one more track than the debut demo. Here, their writing became more cohesive than before and with more aggressiveness, here they began starting to build the Black Metal band they will eventually become. Tracks like, ‘Ztracený Ve Lžích’, ‘Pomsta’ and ‘Smrt Ve Jménu Boha’ have very cold, yet catchy guitar sections throughout and have blends of strange keyboard arrangements. They’ve managed to blend them in a cohesive flow and it makes INFERNO seem more like early EMPEROR. The vocal and drums patters have their own strange way of imposing atmosphere and conveyed the great variety of emotions and thoughts that makes listening to classic era Black Metal a forever relishing experience. Altogether, in these demos INFERNO offered traditionalism, faith in the old natural style of Black Metal and beyond, opened many possibilities within the Black Metal underground. Those who are not aware, Nigredo Productions have now released both demos as a compilation in digipak format and it’s ‘a must recommended’ for all devoted followers of the genre. Explore more about the band and label here: www.facebook.com/infernoczbm, www.facebook.com/nigredorecords.