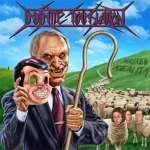 France has always had a pretty cool Metal scene, producing some worth hearing Metal acts for the last 3-4 decades (ADX, KILLERS, NO RETURN, etc.). And when it comes to the Thrash Metal genre in particular, I bet most of you have heard such (at least) semi-legendary names as LOUDBLAST, AGRESSOR or MASSACRA out of the French Thrash Metal scene. Right? Thought so… but what about INFINITE TRANSLATION then? Hands up who have heard about them before? Well, worry not – me neither. INFINITE TRANSLATION have been bombing people’s eardrums since 2004 – and since then their Thrash hearts have pumped hotly boiling blood into the following recordings of theirs, like "The Anger Of Gods" demo (released in 2006), a split album with MASS GRAVE titled "Screams Of Underground" (this came out in 2008) – and they even released their debut album "Impulsive Attack" in 2010, on French indie underground label Emanes Metal Records. "Masked Reality", is a 9-track follow-up album from INFINTE TRANSLATION, and in all honesty this isn’t bad stuff… not at all. As their info kit says shamelessly already, INFINITE TRANSLATION draws their main musical influences from such names as RAZOR, SACRIFICE, EXODUS and early SEPULTURA – and while listening to "Masked Reality", I have no problem to subscribe those aforementioned acts for this French bunch’s main influences. INFINITE TRANSLATION have pretty nicely adopted this whole vibe and feeling of the 80s old school Thrash Metal; they keep things simple, striped down and go straight to the point – just thrashing like maniacs in the last day of humanity (or something like that). This is pretty cool and enjoyable Thrash indeed; highly energetic, raw and violent shit – done in the true 80s fashion. I would also add this little ingredient known as D.R.I.’s "Crossover" album into INFINITE TRANSLATION’s somewhat tasty and spicy Thrash soup because they partly do cross that thin line with their songs where this high-octane Crossover element is brought into the daylight, which is nice and cool in my opinion. So yeah, if you are in any mood for some frenzied and aggressive Thrash – with some Crossover moments lurking behind the songs every now and then, here’s definitely something for your liking. More about these French Thrashers can be lurked, at www.facebook.com/pages/infinite-translation/187598204626140, label: www.emanesmetalrecords.com