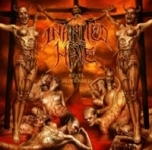 If you’re following the happenings within the Death Metal underground pretty carefully (which I am sure you do, otherwise you wouldn’t read this now), you will most certainly already be aware of the fact that Holland’s SINISTER have called the quits again. But vocalist Rachel Kloosterwaard and guitarist Ron van de Polder, who teamed up with HOUWITSER’s (and also former SINISTER) drummer Aad Kloosterwaard (who actually formed this “new” band in August 2003) are already back in business with a new release, which musically isn’t too different from what SINISTER always stood for. I’m not exactly sure what made them change the band’s name into INFINITED HATE for this (probably legal reasons or whatever), but it doesn’t really matter anyway, cause if you always enjoyed the uncompromising straight ahead brutality of SINISTER, you most certainly will dig “Revel In Bloodshed” in the same way. According to the label’s infosheet they always wanted to mix old school Death Metal with the more brutal US style and weren’t able to do so within SINISTER, which I consider as bollocks. I mean, even though SINISTER had been in existence pretty long, they’d never really played the typical old school Death Metal and always had a far more brutal approach, with several references to the US scene anyway. But what the heck… The album features 10 songs, plus a very intense cover of the old KREATOR classic ‘Flag Of Hate’, all in all it is lacking a bit in variation, but is highly recommended anyway, in particular to fans of SINISTER and brutal Death Metal in general. And as the very cool artwork of Graal (BEHEMOTH, VADER etc.) also compliments the visual side in a perfect manner, there’s nothing really to complain about here. For all further info check out the band’s website at www.infinitedhate.tk. Label contact: www.displeasedrecords.com