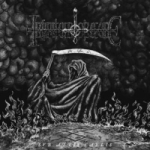 Really a strong record this second full length “Sub Atris Caelis” by the Mexican INFINITUM OBSCURE which is finally out!! This band already displayed some vicious ancient Death Metal on the split with ANCIENT GODS and their debut “Internal Dark Force” from 2005 (released 2006) and luckily didn’t change the winning formula!! First thing that got my blood ran faster was the kind of echoing production already presented on their former effort(s) and with a better drumsound. It’s like you’re listening to something from the first wave of Death Metal and despite its old character really something fresh to hear these days. If you don’t have a clue (which I doubt) think of something unpolished, untriggered and not too heavy like THE CHASM. Each song is dark and obscure with an intense riffing massacre executed by genious Roberto Lizarraga. Furthermore lots of breaks and tempo changes and a really great atmosphere. The tension in each song is growing after each break and will bring back forgotten moods that only true classics are able to. Like on “Internal Dark Force” you’ll also find dark and compelling yet beautiful accoustic and classical parts which make the darkness even more sinister. Everything just fits right and so well done it’s almost unbelievable! I think I’ve said enough, you’d better hear it yourself! If you didn’t got their awesome debut (yet) but your playlist contains killers like NECROPHOBIC, THE CHASM, HACAVITZ, SADISTIC INTENT and MORBID ANGEL you should NOT pass this one! Get this helluva deathstorm as soon as you can! Released through the great and dedicated Blood Harvest Records and Deathgasm Records so there goes your last excuse! Support this marvellous act in every possible way! www.infinitumobscure.com, www.myspace.com/infinitumobscure. Label contact: www.deathgasm.com, www.bloodharvest.se.