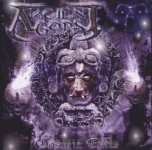 Well, it took me some considerable time to write this review, because of their individual sound I had problems describing those two great Mexican bands presented here, but now I’ll try my best since this release really deserves your attention! The uniting force in the music of both bands is obviously THE CHASM, of which elements surface e.g. in the vocal style and riffing of ANCIENT GODS, the lyrics and atmosphere of INFINITUM OBSCURE and so on and so forth. Apart from that both bands do something entirely different and unique with the THE CHASM base: ANCIENT GODS have more drive and speed than their main inspiration and do not step on the "path of Doom" as THE CHASM often do. ANCIENT GODS four songs are very powerful produced, kick ass and evoke a morbid old school feeling that should consume every serious Death Metal head at instant. INFINITUM OBSCURE continue this tradition but have a stronger emphasis on the individual aspect of their music, because especially the production and the storming yet melodic aggression of the riffs remind me a lot of DISSECTION’s second album. Since the Mexican warriors of death do not forget about dark Death Metal parts and quite unique sounding vokills at least I would not say that they have a certain "Swedish tendency". To sum it up, both bands on this split do an absolutely excellent job, have a great sound, the wicked and sinister feeling Death Metal needs and definitely deserve your support. Surf to the following dimension for additional knowledge on these two cults: www.unholypact.com