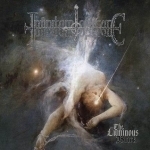 Finally, after three years there’s a sign of life again from the mighty INFINITUM OBSCURE. Their last release was their second studio album "Sub Atris Caelis", released by Blood Harvest Records in 2009. An album that on one hand showed an evolution in relation to their 2006 debut "Internal Dark Force" and the 2009 EP "Obscuridad Eterna" by a more matured sound and experiment with midtros and widespread blackmetallish melodies to sound more atmospheric. On the other hand decreasing the spontaneous roughness and intensity of the previous releases. That doesn’t take away the fact that INFINITUM OBSCURE is aiming for total perfection and carry out a particular dark vision of Death Metal that continues where for example DISSECTION stopped. "The Luminous Black" is a harbinger of the upcoming third album and features one new track, ‘The Luminous Black (Ode To The Fallen Angel)’, one re-recorded track, ‘Path To Apocalypse’ and the BATHORY cover ‘Through Blood And Thunder’. The title song is a solid and even more matured track and probably the slowest track I’ve heard from these guys so far. With its running time of almost 10 minutes, it’s leaning heavy on an intoxicating atmosphere. This track announces a new dimension in their style of majesty, darkness and death. It’s not what I expected. Shutting myself off from everything else and fully focus on it was needed to get gripped by its slumber which support Ivan Parades’s catching leads. A few spins is all that’s needed for the sceptic listener. ‘Path To Apocalypse’ is a re-recorded track from the awesome debut. Because of the rawness and heavier production the old version sounds more intense. ‘Through Blood And Thunder’ didn’t do much to me. When the upcoming third album will be released I can’t tell you, but you can try www.infinitumobscure.com, www.facebook.com/infinitumobscure or www.deathgasm.com for more info. In the meantime, "The Luminous Black" is a nice appetizer from one of the greatest bands in Mexico and in Death Metal in general.