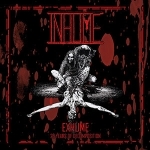 This one is for those of you with a distinct aversion to harmonic or even melodic music, for those who think understandable vocals are absolutely overrated! INHUME is a long running Grindcore band from the Netherlands, that is active since 1994 and released four full length albums so far. Unlike other Grind acts, they didn’t release that many small stuff like splits and EPs to date. To celebrate the 25th anniversary of the band next year, INHUME compiled a record for their upcoming anniversary that features anything they recorded and not released on one of the albums. So, this is a good opportunity for you as well as for me to check out this band, since they passed me by until now. Of course all the stuff on “Exhume: 25 Years Of Decomposition” got a fine remastering and some unreleased recordings were added as well. All in all we have 34 tracks, most of which were taken from the two untitled demo tapes of the band from 1995 and 1997. And those demo songs alone are a reason to get “Exhume: 25 Years Of Decomposition”, since they have everything a Grind lunatic will love. The ten songs from the 1995 demo are a feast for those who dig the stuff of the early American Grind scene with bands like REPULSION or IMPETIGO. These influences were spiced up with ideas rooted in European Grindcore, diversified (de)composition skills and garnished with vocals from one of the two singers resembling Martin van Drunen. Due to the fine remastering, the songs sound damn good, like they were freshly recorded. Especially the longer songs like ‘Forbidden Hunger’, ‘Fucking Shit’ or the Death Metal laden ‘The Missing Limb’ are some of the finest Grindcore stuff I heard in this millennium, even though they are from the last. The second demo tape from 1997 saw INHUME taking a huge step in the direction of contemporary Grindcore, when bands like INSECT WARFARE became the cream of the scene. Yet INHUME still had not lost the ability to write fine Grind songs which means all the nine songs of this demo are still damn great. Thus we have Grind goodies like ‘Airplane Crash’, ‘Human Fucking Guinea Pig’ or ‘Cadaverous Abortion’ who still are state-of-the-art. Asides from the two great demos, “Exhume: 25 Years Of Decomposition” features two fine cover songs from tribute albums, ‘Genital Cancer’ from REGURGITATE and ‘ Acid Bath’ from REPULSION. The songs from the “Dutch Assault” compilation from 2003 and the split 7” with Swiss MUMAKLL from 2008 were released before as well, both on Relapse Records. For those like me, who haven’t heard that stuff yet, there is to say that these recordings are still fine, despite the fact that INHUME are a little more modern here, speaking in Grind terms. The rare recordings on this compilation are six tracks recorded in 2009 as a pre-production for the still recent “Moulding The Deformed” album a year later. These recordings might be pretty rough and sound a little muffled, but they are cool anyway, since they represent a band that explores the limits of Grindcore and doesn’t stop short of using some Death Metal influences as well. Thus ‘Cure For Life’ surprises with a BOLT THROWER styled intro piece, making this one my favourite of the lots of songs from INHUME on this compilation. All songs of these pre-production recordings later made their way onto the album, except for the old song ‘Tiamat’ from the first demo respectively the first album. In the end, we have three songs that were recorded live at the Dynamo in Eindhoven in 1997, two from the demos and the TERRORIZER cover ‘Corporation Pull-In’, in soundboard quality. This is the end of a CD really packed with fine Grindcore from a band I will surely dwell deeper upon. In case you want to do so either, try www.facebook.com/inhumeofficialnl or www.xenokorp.com