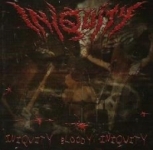 I’m not quite sure if the Death Metal maniacs around the globe were really awaiting a compilation album of Denmark’s INIQUITY, but as long as it’s of this high quality I couldn’t care less. Apart from eight wellknown tracks, from their regular releases (“Serenadium”, “The Hidden Lore”, “Five Across The Eyes” and “Grime”), there’s a bunch of other goodies included as well, turning this into a worthy purchase nevertheless. ‘Revel In Cremation’ and ‘Madman Of The Trade’ both originally appeared on the very cool “Revel In Cremation” 7″ EP and are musically of a similar class as the material on my personal fave INIQUITY album “Five Across The Eyes”. Totally brutal and straight forward Death Metal of the highest technical level with deep guttural vocals. I really wonder though for what the killer PESTILENCE cover ‘Extreme Unction’ was supposed to be recorded for in the first place… Fact is, that INIQUITY have come up with a totally shredding version of the “Malleus Maleficarum” classic, which most of all convinces due to the excellent, almost Van Drunen-like vocal performance. You really need to check that out! ‘Retorn’ and ‘Prophecy Of The Dying Watcher’ both have been taken from two different DieHard compilation albums, while ‘Entangled’ and ‘Torn’ are featured in old demo versions from 1993 and 1991 on here (back then still with additional keyboards!!). The disc gets completed by a live version of ‘Prophecy Of The Dying Watcher’ and a video (also recorded live) for ‘The Bullet’s Breath’. A very amusing booklet with tons of funny photo collages and various quotes from bandmembers and other people makes sure that you will also be entertained visually while listening to the 70 minutes of pure fuckin’ mayhem. Great album, great band!!